The challenge this can solve

If you only have a single screen and want to use PowerPoint’s Presenter View so you can see your speaking notes and the current slide, you have a challenge when presenting in Teams or Zoom. There are some ways to do this with a single screen but they have their potential issues and the quality for the audience can depend on the platform and your screen resolution.

Overview of how this works

(The Windows version of this article is here.)

What is a video capture card?

A video capture card is not actually a card, the name is a holdover from when expansion cards were installed in desktop computers. The device has on one end an HDMI port where an HDMI cable gets connected. This is the video input source. On the other end it has a USB connector that plugs into a USB port on a computer and supplies the video source to the computer as a camera input. Here’s what my device looks like. 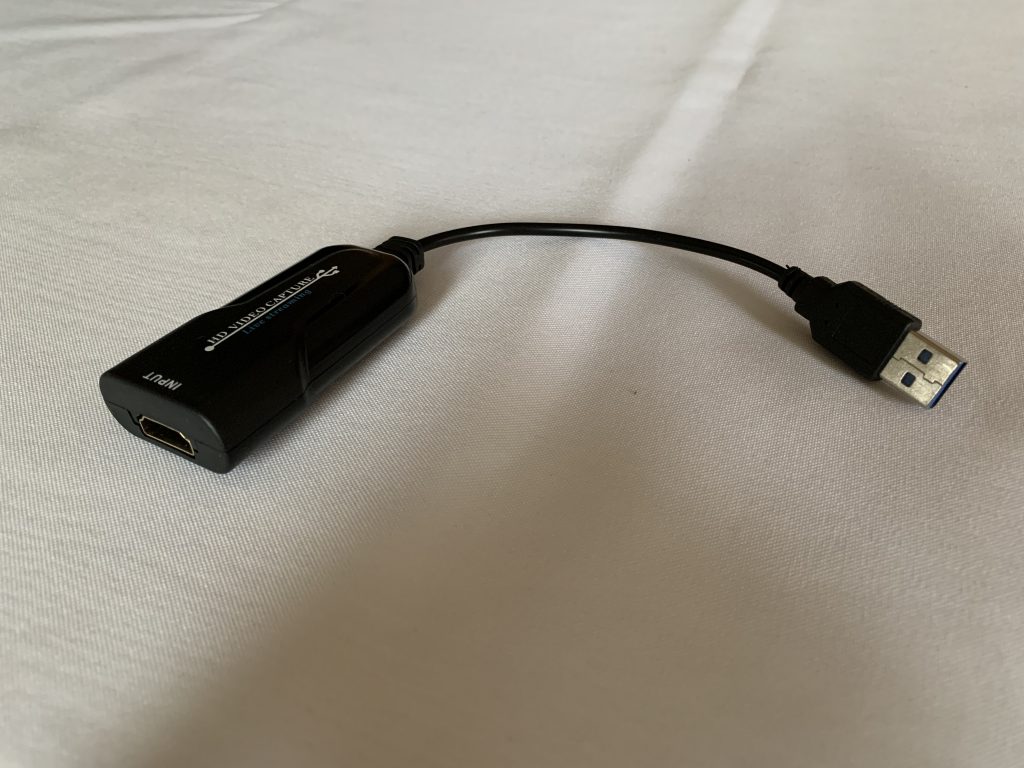 When you look at these devices online, you will see many choices, ranging from under thirty dollars to several hundred dollars. For the purpose of a second screen you don’t need the high-end devices. Choose a device that has a USB 3 connection instead of the slower USB 2 connection. You won’t need a high resolution or frame rate that the gaming cards use, a maximum of 1920 x 1080 resolution and 30 frames per second (fps) is more than enough. I suggest you look for one that has a short cord between the HDMI end and the USB end instead of one that is more of a block style so that you don’t block any USB ports when you plug it in. Here’s the one I bought on Amazon and use: https://amzn.to/3bSZQqU. Certainly look at competing devices as well but I don’t think you need the high-end gaming devices.

After you connect the device your computer will download the correct driver and install it so the device works.

Connect an HDMI cable from a video output to the card 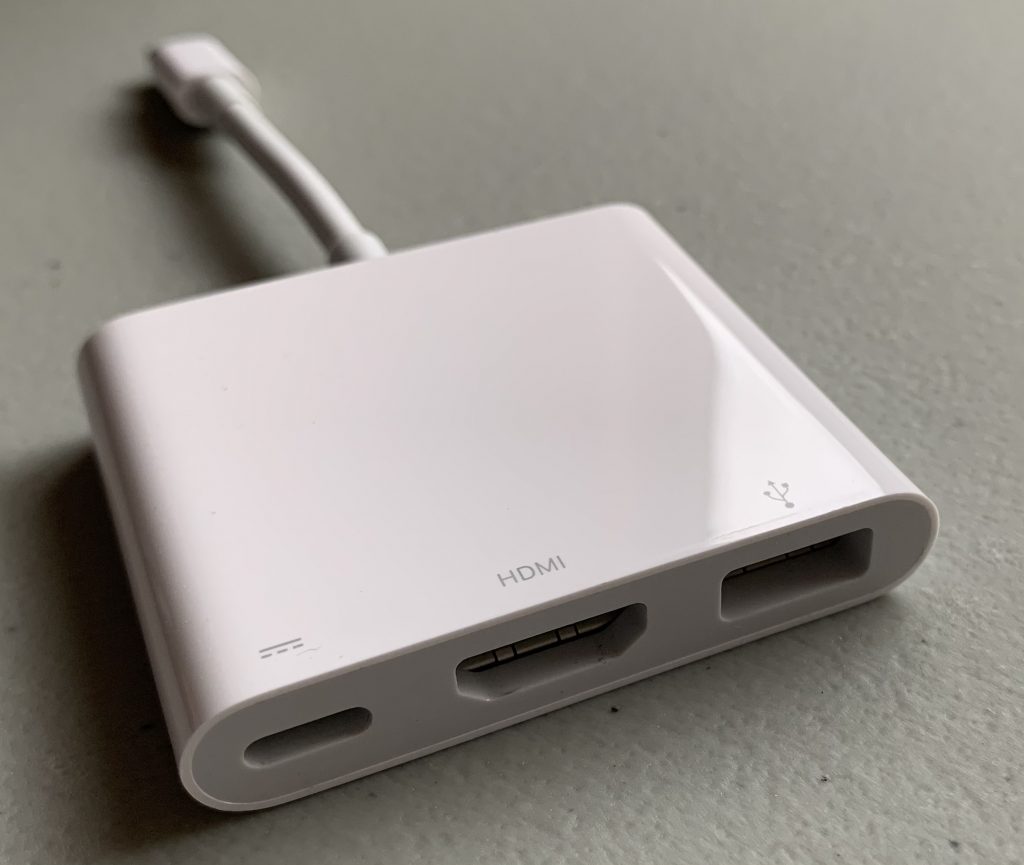 Here’s what it looks like with the adapter, capture card, and HDMI cable connected. 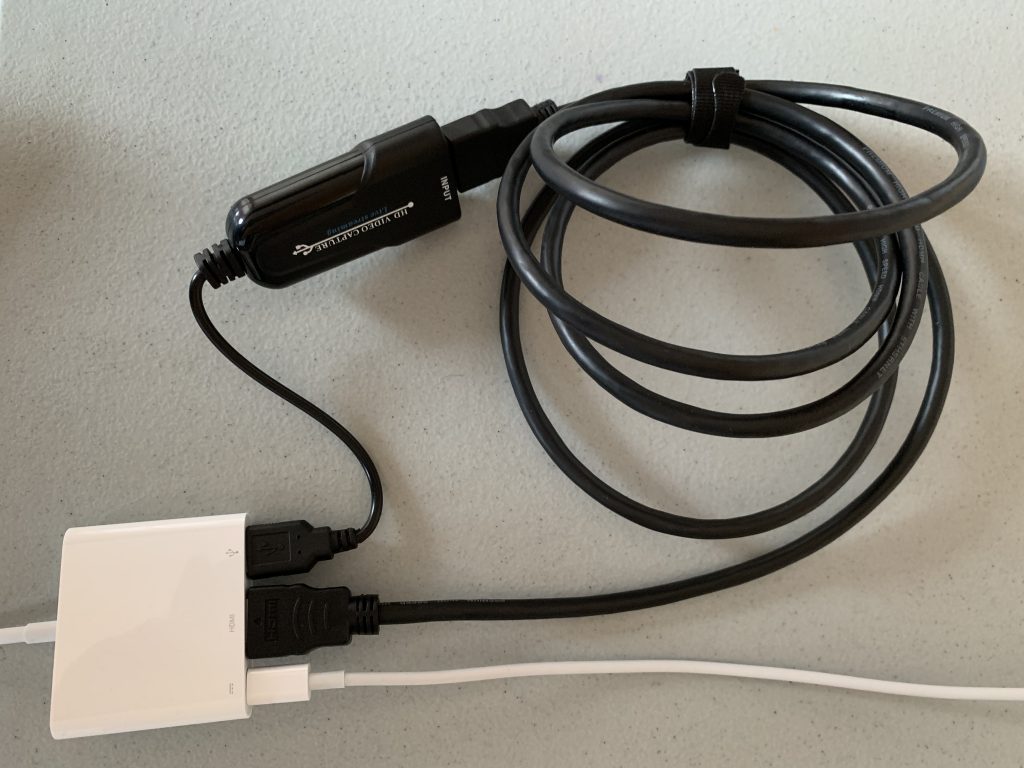 Your laptop now thinks that it has a second screen attached. In the Display Settings Arrangement section, make sure that the Mirror Displays checkbox in unchecked so that the desktop is extended on to the “virtual” second screen. 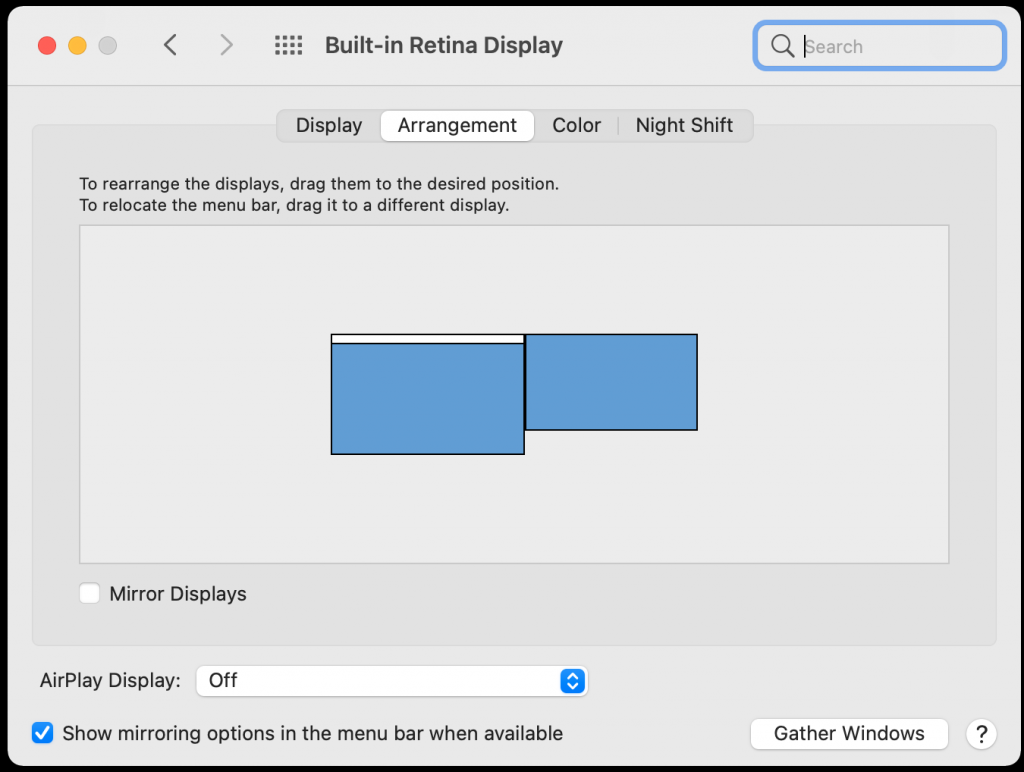 Set up PowerPoint to use Presenter View and a second screen

Now that your laptop thinks it has a second screen, you can set up your PowerPoint file to use Presenter View and select which screen the slides should be displayed on. In PowerPoint on the Slide Show ribbon, click on the Set Up Slide Show button to open the dialog box. In the Monitors section use the drop-down list of monitors to select the video capture card (usually called Monitor 2) as the monitor to display the slide show on.

When viewing the Slide Show on the laptop you can return to Presenter View by clicking on the three dots in the lower left corner of the slide and selecting Swap Displays in the menu that appears. 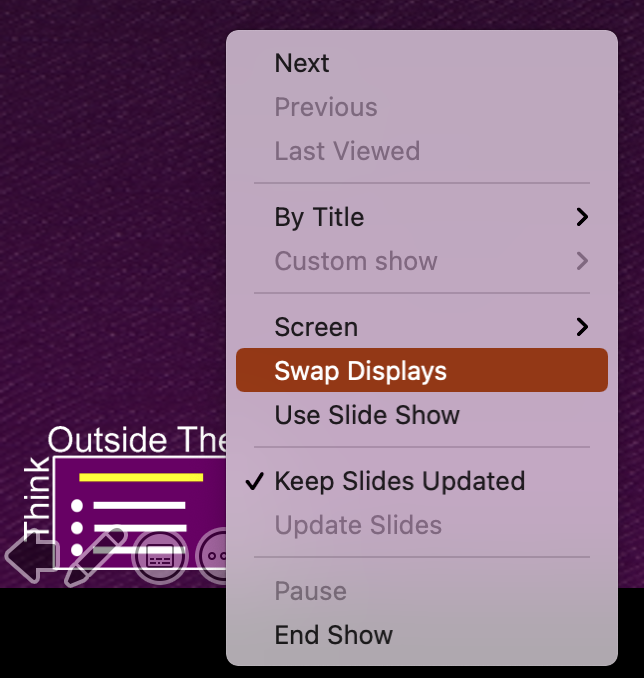 Use Command+Tab to return to the meeting platform controls since Presenter View takes up the entire screen. In Teams or Zoom, share the second screen, the one with the slides being shown full screen. Here’s what the Zoom sharing dialog would look like (Desktop 2 would be shared). 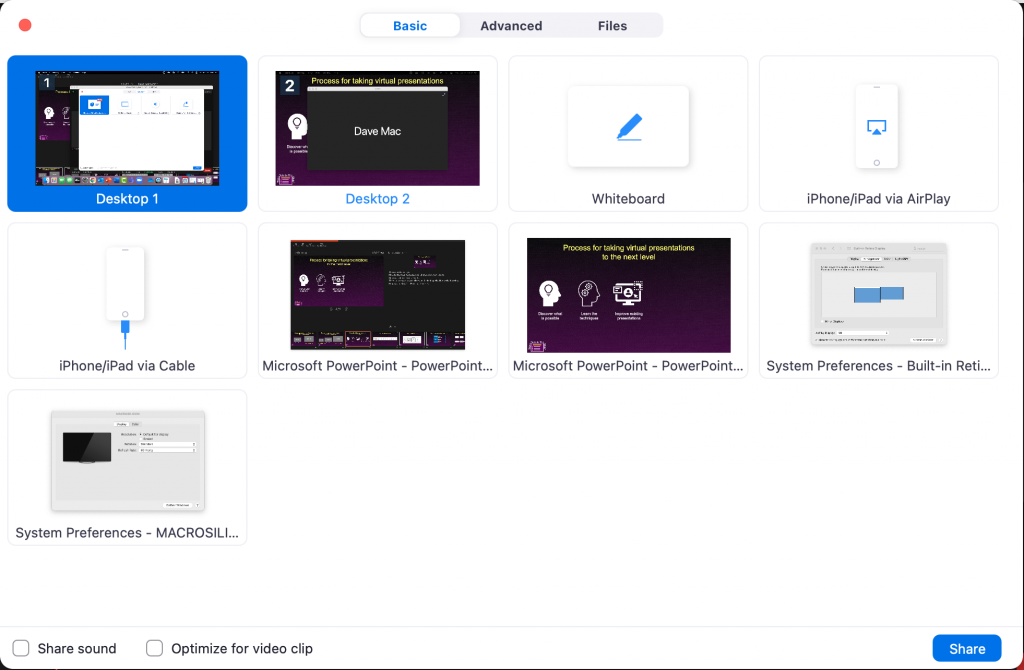 Since your laptop recognizes a second screen, this same method of sharing the second screen should also work in Webex, Google Meet, or any other meeting platform.

Once the audience sees the screen with your slides, you can start delivering your presentation using Presenter View. Don’t forget that Presenter View has some features that you make great use of in virtual presentations as you can see in this article and video.

When done, end the presentation and disconnect the card & cables

Since PowerPoint thinks you have a second screen connected, end your presentation the same way you would if you had a physical second screen. Stop sharing the screen in the meeting platform, end the meeting, and disconnect the HDMI cable and the video capture card. In most cases the laptop will recognize the video capture card the next time you connect it and extend the desktop instead of using the default of duplicating it.

Advantages of this method

There are a number of advantages of using this method of creating a second screen to use PowerPoint’s Presenter View, including:

Try this method if you only have your laptop screen

If you just have your laptop screen and want to use Presenter View in PowerPoint to see your notes and use the expert features to be more effective when presenting, try this method of using a video capture card to create a “virtual” second screen.

The video below shows me connecting my video capture card to my laptop and the steps above to share my slide show on the “virtual” second screen in a Zoom meeting in Windows. The steps are similar for a Mac so use this video as a reference along with the screen capture images in the article above.

The webcam I recommend and use is the Logitech C920 webcam. HD resolution and software that gives you extra options (video on the Logitech software here)