For the last year or two I have noticed newspapers and magazines using donut graphs more often to show proportional data results. Donut graphs may look like they are hard to create, but they are actually built into PowerPoint, so any presenter can use them. Here is an example that shows how a donut graph can be used. 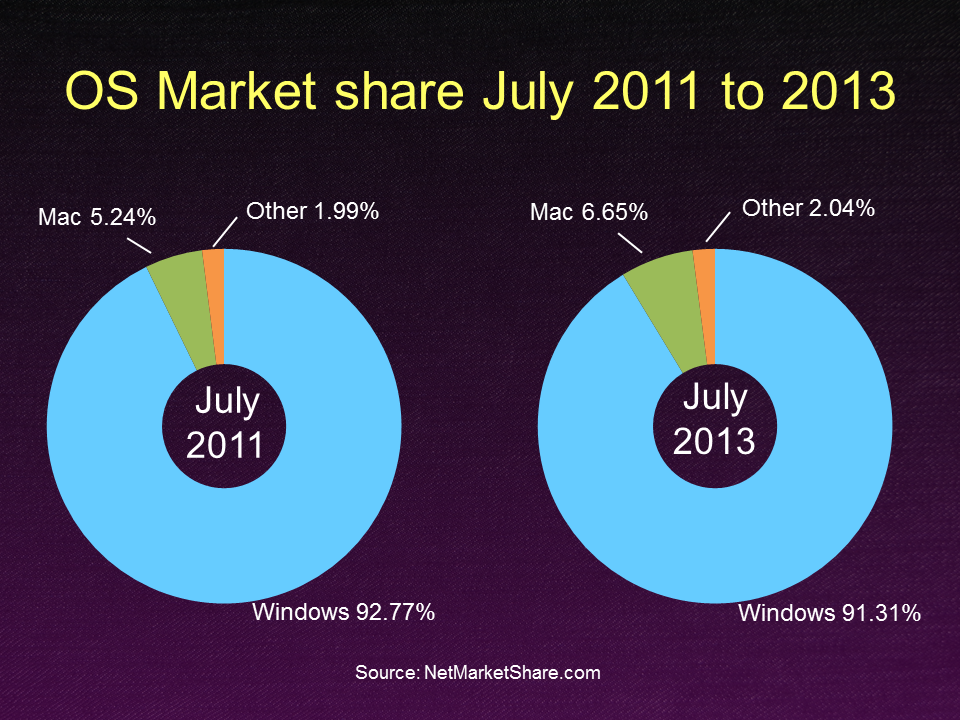 In this article I want to talk about when you may want to use this type of graph and how to use it effectively.

I also think that a donut graph is a good graph to use when showing a comparison, like the example above. It allows the identification of the two graphs to be placed in the center of the graph instead of a caption on each graph that can sometimes get lost.

When creating donut graphs, I have some suggestions to keep them clean and clear. First, a donut graph works best with very few wedges, usually three or less. More than three wedges gets a little harder to understand. Two wedges in a donut graph can work well when you are showing a comparison at two points in time and there is a dramatic change in the size of the two wedges.

Second, labelling a donut graph is much harder than a pie graph, Donut graph data labels don’t give you the option to automatically place them outside the segments the way a pie graph does. You will have to manually drag each label from inside the wedge to outside. Sometimes it is best to just leave the data labels off and add your own using text boxes. That way you can format and position them exactly the way you want to (as I did in the example above). You will also add a text box to indicate what each donut graph represents when you are using them in a comparison slide. There is no center title option for donut graphs in PowerPoint.

Third, I find it easier to understand a donut graph if the hole in the center is a little smaller than the default size. The default is to make the hole 50% of the diameter of the graph. By using the option to format the data series, you can reduce this value to around 35%, which looks better in my opinion because it makes each wedge bigger on the slide. Finally, you do have the option to animate the pieces of the donut using the regular animation feature. If you only have two wedges in the donut, animation is unnecessary.

If you use pie graphs in your presentations, why not consider a donut graph instead for some of the slides. It gives visual variety and works well for comparison slides.