When you are presenting in a Microsoft Teams meeting and you want to include a demonstration of an app on your iPad or use your iPad as a whiteboard, I think it is best that you integrate your iPad with the computer you are using instead of connecting it as a separate participant in the meeting. It is a smoother experience for your meeting attendees and for you as the presenter.

I think the best way to integrate your iPad with your computer is to connect it as a camera using a video capture device. You display that camera in the Teams meeting in spotlight mode so it fills the screen for everyone. Then you can use the iPad and it will be large enough for everyone to see. This technique works on both Windows and Macs.

What is a video capture device?

A video capture device has on one end an HDMI port where an HDMI cable gets connected. This is the video input source. On the other end it has a USB connector that plugs into a USB port on a computer and supplies the video source to the computer as a camera input. Here’s what my device looks like.

When you look at these devices online, you will see many choices, ranging from under thirty dollars to several hundred dollars. To display your iPad in a Teams meeting you don’t need the high-end devices. Choose a device that has a USB 3 connection instead of the slower USB 2 connection. You won’t need a high resolution or frame rate that the gaming cards use, a maximum of 1920 x 1080 resolution and 30 frames per second (fps) is more than enough. I suggest you look for one that has a short cord between the HDMI end and the USB end instead of one that is more of a block style so that you don’t block any USB ports when you plug it in. Here’s the one I bought on Amazon and use: https://amzn.to/3bSZQqU. Certainly look at competing devices as well but I don’t think you need the high-end gaming devices.

Use an adapter to get an HDMI output from your iPad 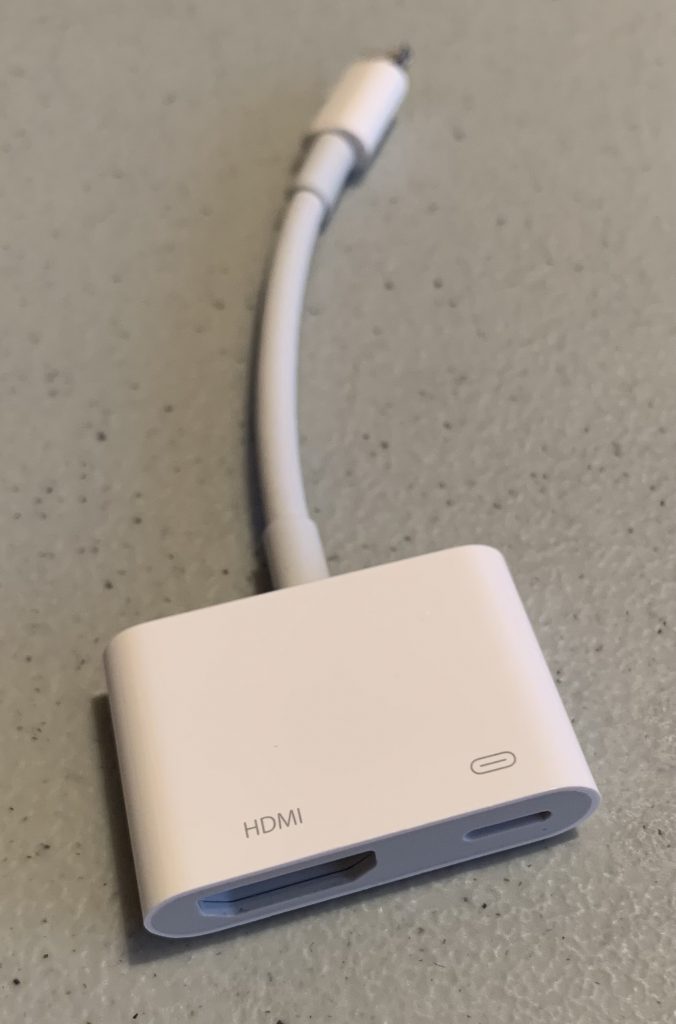 Now that the computer and the iPad have devices that both have an HDMI port, you can simply use an HDMI cable to connect the HDMI output from the iPad adapter to the HDMI input on the video capture device. Here’s what it looks like when I connect my iPad to my laptop. 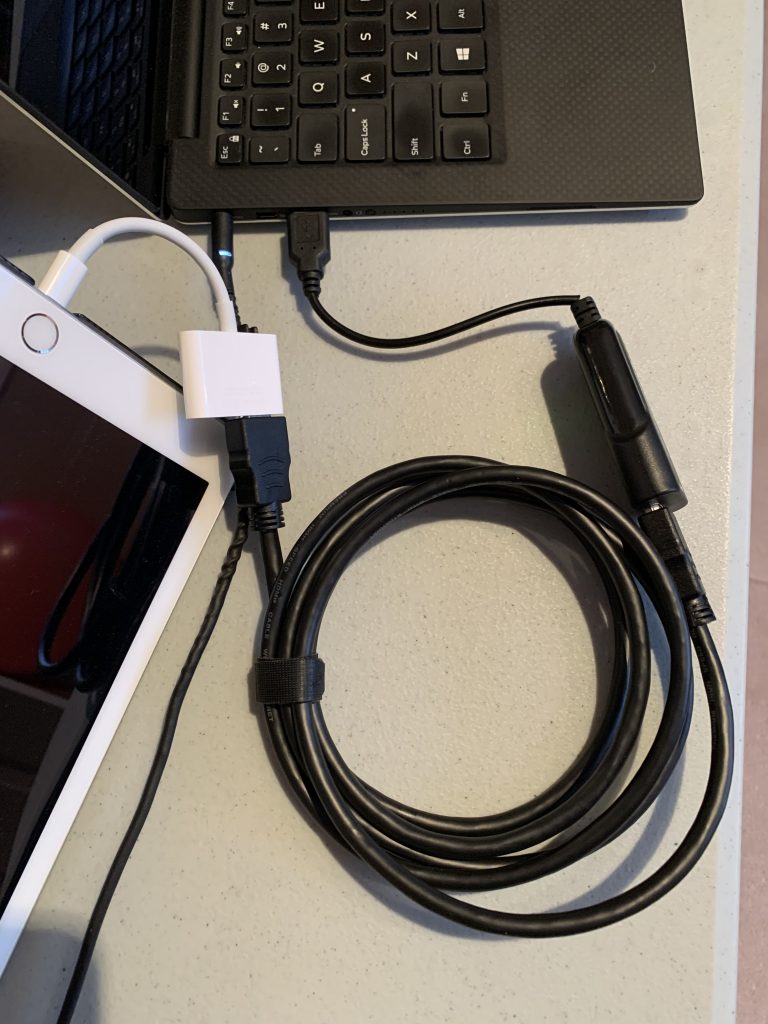 Now your computer recognizes the iPad screen as a camera input. You can check this in the Camera app if you want to confirm it is connected properly.

In the Teams meeting, switch the camera device

Since the iPad screen is now a camera device, you can share this camera instead of your usual webcam in a Teams meeting. Click on three dots in the Teams meeting controls and click on Device settings to display the device settings panel.

In the Camera section of the panel, select the video capture device as the camera. 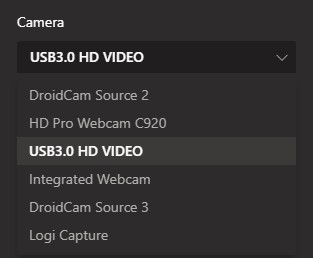 Spotlight your own video in the meeting

The iPad screen will now show as your camera to the other participants in the meeting (the view of your own camera on your screen in Teams will look reversed but it displays properly in the meeting). To make your camera large on everyone’s screen, you can use the Spotlight feature in Teams. The Spotlight feature is available when you are the meeting organizer or part of the organization, it is not available to guests in a Teams meeting. Open the Participant panel by clicking on the icon in the Teams meeting controls.

If it asks you to confirm this action, confirm you want to be spotlighted.

You can close the Participant panel.

Show the iPad screen in the meeting 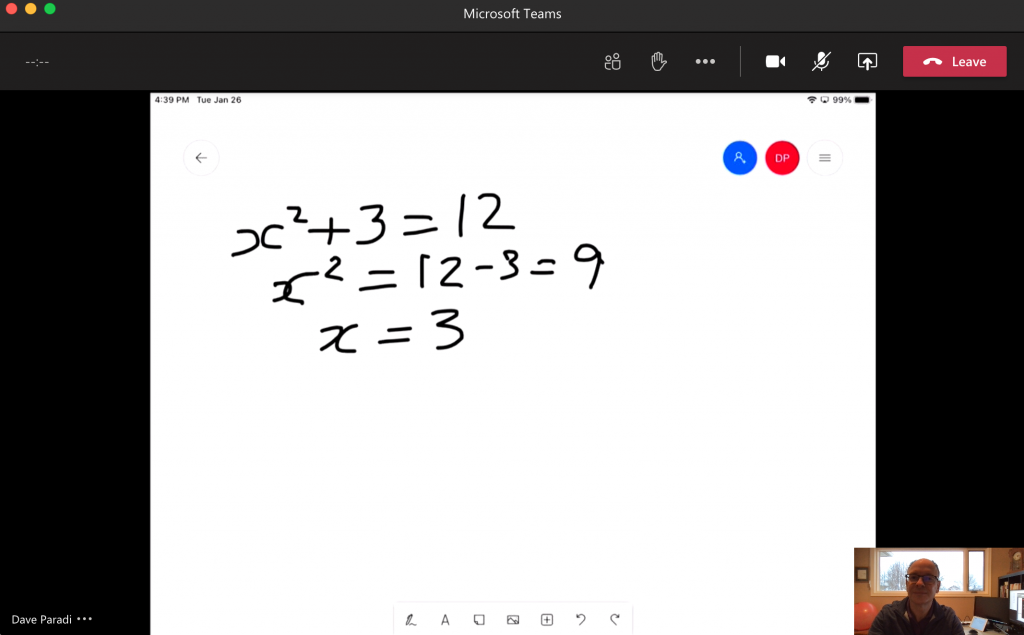 When you are done showing the iPad screen, stop spotlighting yourself in the meeting. Open the Participant panel if it is not already open. Click on three dots beside your name in the list and click on Exit spotlight.

If it asks you to confirm this action, confirm that you want to exit spotlighting.

Switch your camera device back to your webcam

Use the steps above to display the device settings and switch your camera back to your webcam so people can see you in the meeting again.

Use your iPad screen in a Teams meeting

Adding your iPad screen as an option to share from your computer in a Teams meeting gives you more ways to connect with the participants and allows you to share more content with everyone.

The video below shows me connecting my iPad to my Windows laptop through a video capture device and sharing a whiteboard from the iPad in a Teams meeting.